The browser you are using is not supported. Some critical security features are not available for your browser version.

We want you to have the best possible experience with Bozinga.com. For this you'll need to use a supported browser and upgrade to the latest version. 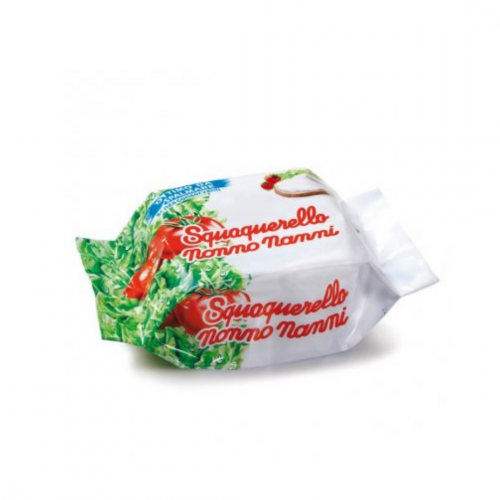 In 2012, the "Sqacquerone di Romagna" gained the DOP recognition (protected designation of origin), which limits its production to the specific places mentioned in the specification.

The Squaquerello that does not have the "Romagna" specification can be produced in any other area of Italy.

Squaquerello is made with whole pasteurized cow's milk and belongs to the whole raw-cheeses category. The cheese does not show any crust or surface film. It’s sweet on the palate , almost as fresh as milk, but it is also characterized by some very evident acidulous property (thanks to the lactic bacteria fermentation). Originally, squacquerone was a typical cheese of the cold season. It was born at the family level, due to the urgency of using the milk produced in insufficient quantities to justify sending it to dairies. It is considered as a specific food of the pastoral community. The first traces of its spread in the highest social groups date back to the 19th century.

Squaquerello is a fresh cheese. It requires storage without light, at low temperatures (refrigeration) and possibly in a sealed container. The shelf life of fresh food is limited to a few days. The packaged one has a rather short expiration date and once opened must be treated as the previous one.

Since it contains lactose, it can be called a dairy product . From a nutritional point of view, it is above all a good source of: essential amino acids , calcium and vitamin B2 (riboflavin).

From a microbiological point of view, Squaquerello is considered safe.

During the production cycle, it has a fairly limited risk of pathogenic bacterial contamination; moreover, being made from pasteurized milk , it is suitable for the diet taken by a pregnant woman .

Squaquerello has a fairly high energy content although, compared to aged cheeses , it is less caloric.

To produce this cheese, start from pasteurized whole milk which is subjected to very short maturation. There is no cooking of pasta like all fresh cheeses. The steps to follow are:

add the ferments to the rennet for acidification;

let the curd mature in whey for about 90 minutes;

purge the serum from the cut curd and let it rest;

proceed with putting in mold and short term and salting, in less than 8 hours;

mature for 4 days in a refrigerated environment with high humidity.

The risk of pathogenic bacterial contamination during the production cycle is rather limited.

Squaquerello is a dairy product with a delicate flavor and aroma; it is rindless, soft and easily spreadable. The culinary use of squacquerone is as a cold dish, in which it is accompanied mainly with raw and fresh vegetables( lettuce, arugula, radicchio, tomatoes, cucumber, fennel, carrots, celery, etc.).

It is often used as an ingredient in sandwiches , tortillas and tigelle.

Other possible consumption methods are: melted on the dough (without heating it in the pan) and spread on the still- grilled vegetables . From an enological point of view, it goes well with white or rosé wines with a light body, less demanding and possibly autochthonous in the specific dairy production area.

The best combination is certainly the one between Squaquerello and piadina, to which you can add the cold cuts. Another very pleasant combination is with risotto or with savory pies made with vegetables. Furthermore, Squaquerello cheese goes well with sweet dishes, such as ice cream or mixing it with honey and red fruits. In short, the recipes can be many and varied, but all are absolutely delicious.

Sale of handmade and gourmet food products 100% genuine and imported from Italy. In accordance with the highest quality controls and guarantees of freshness and authenticity of the products. We guarantee the best quality at the most competitive prices on the market since we deal with the largest producers of products and / or exclusive importers, without intermediary merchant chains.

All the inventory that our company can confirm exists in warehouses in our warehouses in the United States and Italy. To be specifically confirmed at the time of each quote.

Professional quality product packaging for transport to the recipient; Either the retail buyer or the wholesale buyer.

Advance payment for retail / direct-to-consumer orders. Special treatment, as detailed in the pro-forma invoice for bulk orders, sent prior to the closing of the negotiation and shipment of the product.